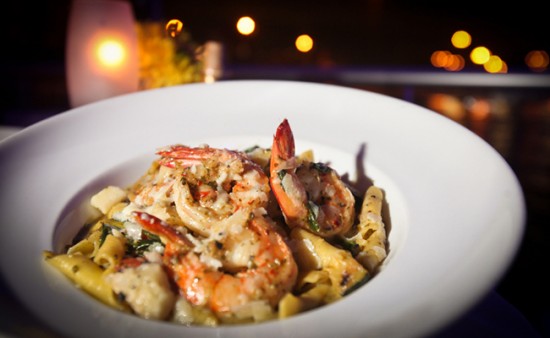 Prepare and clean lobster, shellfish and shrimp for cooking. Season lobster, scallops and shrimp with salt and pepper. In a large, 14-inch skillet over medium-high heat, heat oils together until very hot. Add lobster and scallops, placing lobster flesh-side down. Add towel-dried clams, garlic and shallots, stirring constantly; brown garlic and shallots well. Add shrimp and brown slightly. Add mussels, stirring. Carefully add brandy and flame it. Use a long lighter to ignite the alcohol or tip the pan slightly to allow gas flame to catch it on fire. Cook until brandy’s flame subsides. In a small bowl, mix heavy cream, ketchup, cayenne and tarragon. Lower heat to medium and simmer the sauce and shellfish to reduce till slightly thickened. At this point, if clams are still not opened, remove all shellfish except clams and continue to cook over medium heat until they open. (Discard any mussels or clams that don’t open.)
To serve, arrange shellfish in serving dish and pour sauce over all. Serve over hot pasta, if desired.

Makes 2 servings: Nutritional information provided by the restaurant and is based upon using heavy cream.

* After cleaning, soaking helps to remove excess sand that may be inside the shellfish. Be sure to towel dry the clam and mussel shells before placing in hot pan to avoid flashing and scorching of oil.

Blue Moon Fish Company is the culinary dream of chef-owners Baron Skorish and Bryce Statham; a fusion of Louisiana flavors and Florida’s freshest catch, offering unparalleled fresh seafood and waterfront dining, and is a must in the Fort Lauderdale area! Be sure to tell them that Fred Bollaci sent you!

A graduate of the famed California Culinary Academy, Baron has worked for the finest hotels and restaurants in the Western Hemisphere. In 1989, his talents took him to the Virgin Islands where he served as chef de cuisine for Hyatt Hotels at the Hyatt Regency St. John.

Two years later, he relocated to the British West Indies and was Chef de Cuisine for the Hyatt Regency Grand Cayman. In 1993 he took over as executive chef at Grand Cayman’s popular Ristorante Pappagallo.

Chef Skorish’s numerous honors and awards include his work featured in Bon Appétit Magazine as well as an invitation to prepare dinner for the Grand Cayman chapter of the prestigious Confrérie de la Chaìne des Rôtisseurs, a worldwide gastronomic organization. 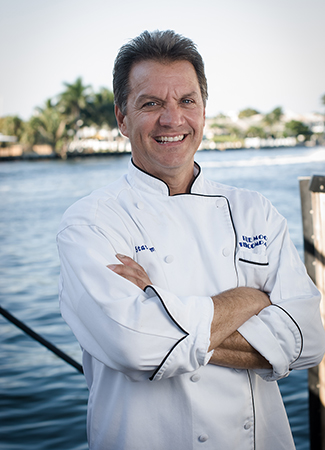 A graduate of the celebrated Culinary Institute of America in New York, Bryce Statham is one of the most highly regarded executive chefs in South Florida. Throughout his more than 15 years of experience at restaurants from South Carolina to the Virgin Islands, Bryce honed his skills.

From 1988 to 1994, he worked for three top hotels in the Hyatt organization. He later served as corporate executive chef for Grevgold Enterprises, one of South Florida’s leading restaurant corporations, including the company’s Fort Lauderdale flagship, Yesterday’s on the Intracoastal.