Discussing the Origins of Roman Favorite, Pasta Carbonara from Golden Palate Partner® Marco Corricelli of Osteria Celli in Ft. Myers and My Discussion of Carbonara and My Authentic Roman Recipe!

Opening discussion by Golden Palate Partner® Marco Corricelli, Chef/Owner Osteria Celli in Fort Myers, FL
Let’s start by saying that the “carbonara” as we know it today is a rather recent invention. Before the Second World War, in fact, there are no written records of this recipe and there are no report of it in the most famous books. Most of the theories on the origins are linked to the presence of American allied troops in Italy during the last two years of war.
The most popular theory has it that this pasta mixed with eggs, ham and bacon was invented by a Roman cook that prepare it using the soldiers rations. Therefore the recipe requires for pancetta, similar to bacon, rather than the traditional guanciale (meat from the pig’s cheek). This theory, however, is disputed by some experts: some argue that the ingredients are actually those of the Allied troops rations, but in reality, the carbonara was invented by chef Renato Riccione Gualandi inspired by a Slovenian recipe. Others believe that the origins of this dish are much older and related to the Lazio recipe “cacio e ova” (cheese and eggs) eaten by coalminers (in Italian carbonari).
Probably, carbonara is the result of an evolution of the traditional “cacio e ova”, modified at the end of World War II, using the ingredients available at the time. For these reasons it is difficult to associate this recipe with the word “authentic”, there is no doubt though, that some necessary tricks have to be applied to prepare a good pasta carbonara.
This dish is prepared in many different ways: some add the cream, others prefer to sauté the pasta with the egg, while others think it is better to use the guanciale instead of bacon. Perhaps, given the recent origins of the recipe, none of these are to be considered formally incorrect, as it is more a matter of taste. Nonetheless we asked our chef Mario Grazia some tips on how to make a good carbonara:

– When you drain the pasta set aside some of the cooking water and add it to the egg in order to obtain a creamy and not too dry carbonara.

– The carbonara is likely to be a recipe from the Lazio region, where the use of cream is very limited. Therefore, in order to respect the original spirit of the recipe, it might be better not to use it. If you add some cooking water to the pasta, the dough should be fairly smooth even without the cream.

– When you mix the pasta with the egg, be careful to pour the last on the pasta and not the other way round, to avoid the making of annoying lumps.

That being said, if you are in Southwest Florida, you should definitely visit Marco and Osteria Celli! Please tell him I sent you! Now, having just returned from several weeks in Rome, I have the following thoughts to share with you from Roman chefs and friends about how to properly execute this dish (not everyone agrees), and after tasting many, I have developed the recipe below that best appeals to my taste, as I explain how I got there! Hopefully you will give it a try and determine what works best for you! 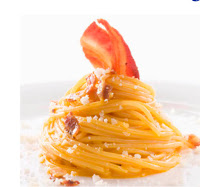 Having spent a lot of time in Rome over the years, and talking to a lot of Roman chefs–both home cooks and professionals, they certainly have their opinions about Carbonara. Most Romans see it as a birth right, and an absolute requirement of anyone who lives in Rome to know how to prepare Carbonara. Their attitude is, if you don’t know how to make it, you shouldn’t live here (kind of like you’re voted off the island!)–be forewarned! That being said, there are a number of variations. Some use guanciale, while others use pancetta. Some like it greasier, while others blot a lot of the cooking grease from sautéing the guanciale/pancetta. A majority in Rome use guanciale, which I like best with it, but truly either guanciale or pancetta will work, and one is not more “correct” than the other. If you are someplace in the States where either is hard to get, look for an artisanal bacon, preferably not one with any added flavors or smoking process (which will totally change the end flavor of the recipe). Some people I know actually like it with hickory smoked bacon, it is a matter of taste, but certainly not something you would see in Rome. I have also seen chefs use diced raw prosciutto, and even speck (smoked prosciutto) for a variation. Feel free to play with it, I always say, but I want you to experience as close to authentic in the opinion of my humble, well-traveled taste buds, then see if you want to tweak it.

As for eggs, the consensus seems to be 1 whole egg, and 1 yolk per person, with an appropriate serving being 80-100 grams (3-4 ounces). There are two schools of thought when it comes to grated cheese. Some prefer straight Pecorino Romano, a local sheep’s milk cheese, which was perhaps the origin of this simple, local dish, likely inspired in the region around Rome. The second school of thought is to incorporate half grated Parmigiano Reggiano (a slightly nutty, and more expensive cow’s milk cheese from Parma, in northern Italy) and half Pecorino. Most everybody whisks the eggs and cheese and pepper before combining with the pasta. Some add in pasta water to help amalgamate the ingredients and temper the eggs, others don’t. You can see that while everyone is expected to know how to make Carbonara, there is no consensus on exactly what this means. Friends insist that the quality of the eggs is important– my friend Giorgio uses Paolo Parisi eggs when making his, and the result is a deep, orange-yellow color, and rich flavor, though living in the States, I have to say that as a rule, the eggs in Italy are richer in flavor and brighter in color than our eggs here. So, I think I have figured out a happy medium as to how to prepare this in Rome and not get thrown out of the city, but it is a little more challenging in the U.S., where the ingredients and availability is more limited. Below is a recipe I have tried, both in Italy and in the U.S., which I developed after trying several dozen Carbonara renditions at restaurants and in friends’ homes in Rome, watching them, making it with them, talking to them, and analyzing what I liked, and what I didn’t, and why. Here goes!

1 lb pasta of your choice (prefer a dry, imported Italian pasta, such as spaghetti or rigatoni, De Cecco is a good brand)

1 whole egg, and 4 egg yolks (1 per person) (use large eggs, and look for the best quality eggs you can find–if you know someone with a farm, or have a farmer’s market in your community with locally-raised eggs, this is a good place to look)! Supermarket eggs will suffice in a pinch, but they lack the richness of flavor and color. Some chefs I know in the States substitute duck eggs. The flavor is slightly different, if anything experiment with this before trying it out on guests– I have found that half duck eggs, half regular eggs is usually a safe bet, but fresh chicken eggs from a local farm are really the best!

1/2 cup freshly grated Reggiano Parmigiano (and additional grated cheese– either or both, to serve at the table) (I decided I liked the combination better than straight Pecorino. Especially when combined with Pancetta or Guanciale, the straight Pecorino tends to be quite salty. The Parmigiano adds a little elegance to the dish, and tempers the inherent saltiness a bit.

8 ounces Pancetta or Guanciale (cut into matchsticks), can substitute bacon if need to, but the flavor will be different.

large stock pot lightly salted boiling water (1 cup pasta cooking water, set aside at the end of cooking the pasta before you strain). I say lightly salted, because the cheese and pancetta/guanciale is already salty, saltier than most pasta sauces/condiments. You can always add but not take away.

Optional- minced Italian parsley as a garnish (this is something I like to do, it adds a little color and flavor at the end, and looks nice at the table).

Sauté the matchsticks of pancetta/guanciale or bacon in a skillet over medium-high heat until crisp. Place on paper towels, set aside. Remove most of the grease from the pan with a paper towel, leaving just a little for flavor. Keep off the heat.

Boil the pasta, cooking until SHY of al dente. When you bite the noodle, there should be some white in the middle, contrary to what many Americans think. Remember, the pasta is coming out of boiling water and is still hot, and will continue to cook/soften even when it is out of the water! Never rinse your pasta, this removes the starches that are essential to helping the sauce bind to the noodles, and also lowers the temperature, resulting in gooey, gummy pasta. You want the pasta to stand firm and retain its starch.

While the pasta is cooking, whisk together the eggs and grated cheese in a large bowl with abundant black pepper. For this dish, I recommend at least 20-30 twists of the pepper mill. I liken this to making an egg and cheese batter.

Reserve a cup of pasta water to help temper the egg mix.

Toss pasta in the pan with the egg-cheese-pepper mix, and add in the pancetta/guanciale and a splash of the pasta cooking water. Toss until all elements are combined, and the result is an eggy, cheesy, bacon and peppery mix coating all the pasta. It should be warm, not hot, and not over any heat, or the eggs will start to curdle. Place in a large serving bowl and toss with additional grated cheese and black pepper. Serve immediately.