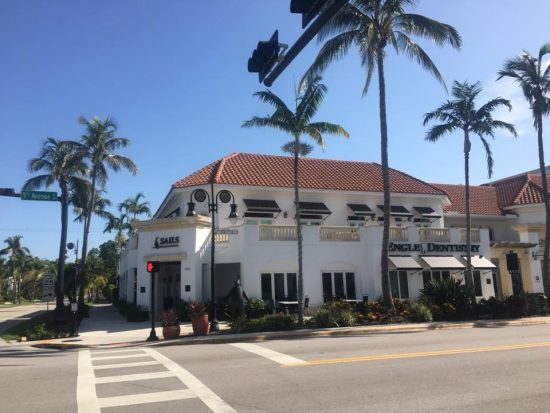 Naples’ newest fine dining restaurant has raised the bar significantly for the upper echelon of cuisine and service, providing a world class experience where the highest quality, attention to every detail, and flawless service are the standard. Sails evokes the sense of a private luxury yacht cruising the most fashionable ports in the Mediterranean, with a seasoned international staff and renowned Chef Jacob Jasinski, who hails from The Ocean House in Westerly, Rhode Island, a five-star Relais & Chateaux property at the helm.

Just steps from the powder white sand beaches of the Gulf of Mexico, overlooking the important corner of fashionable 5th Avenue South and 3rd Street South, you will find your new favorite Naples destination for that impeccable meal. “Where Port Royal meets Portofino,
breezily transporting you to the good life, only better” is the restaurants’ motto. 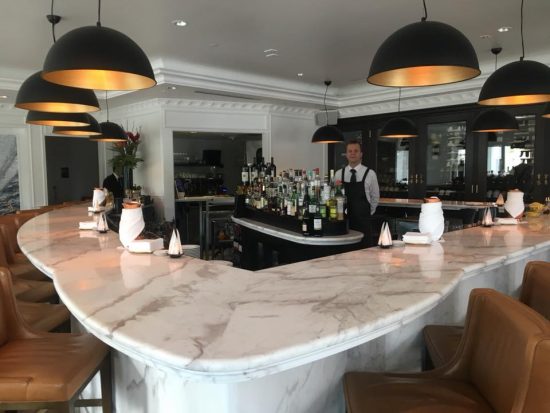 Once you set foot in Sails, experience the personalized pampering, select your seafood from an impressive display case featuring the freshest and best selections from around the world, including the Mediterranean, New Zealand, Holland, and local Florida waters, you will soon recognize this is an extraordinary restaurant. After settling into my plush hand made leather chair custom made for the restaurant in Italy, and sipping my craft cocktail, touring the kitchen and meeting Chef Jasinski and chatting with owners Veljko and Corinne, I felt my ship had come in! 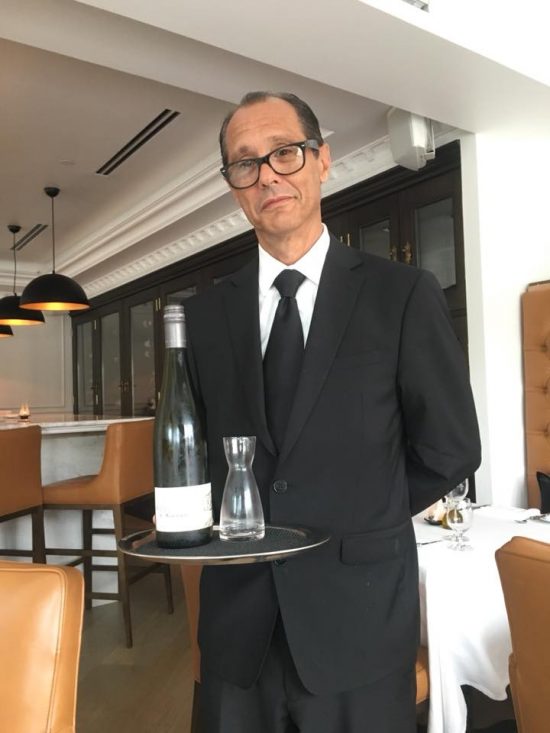 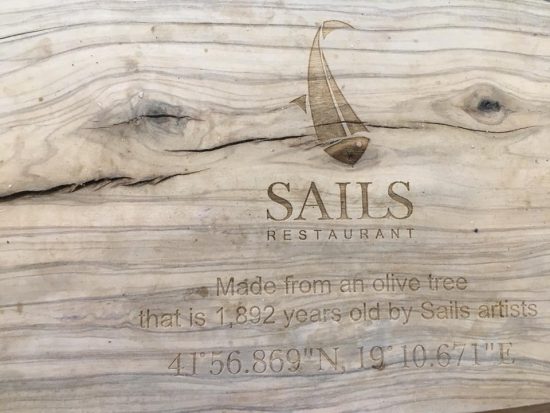 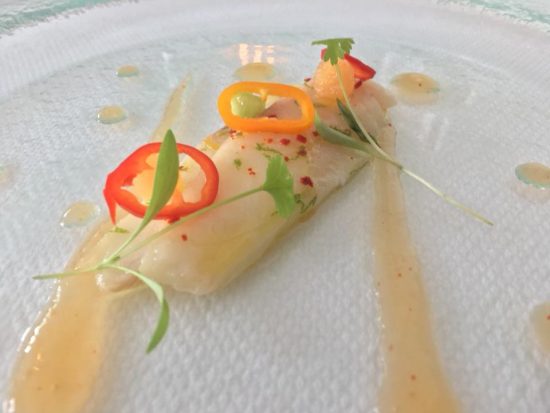 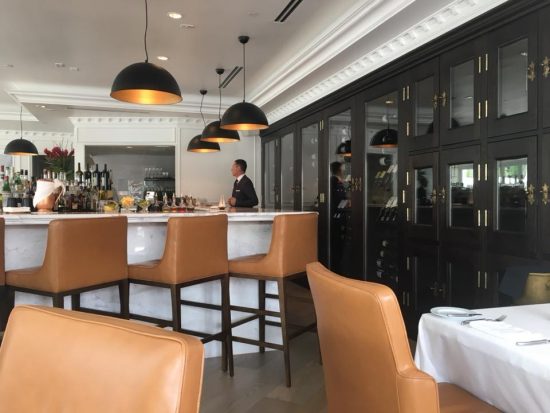 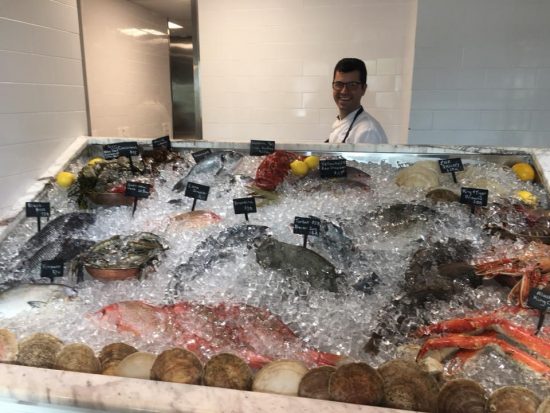 Sails features the finest flavors of France, Italy and Greece where flavors and ambience recall an elegant coastal European getaway. 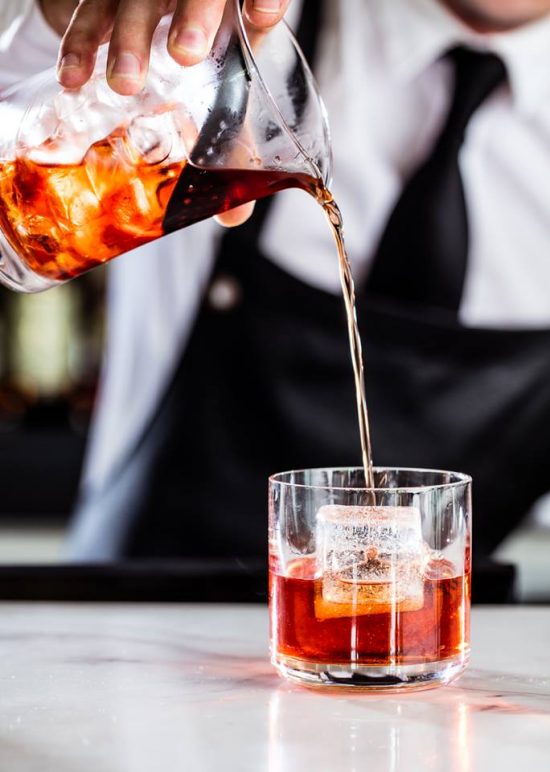 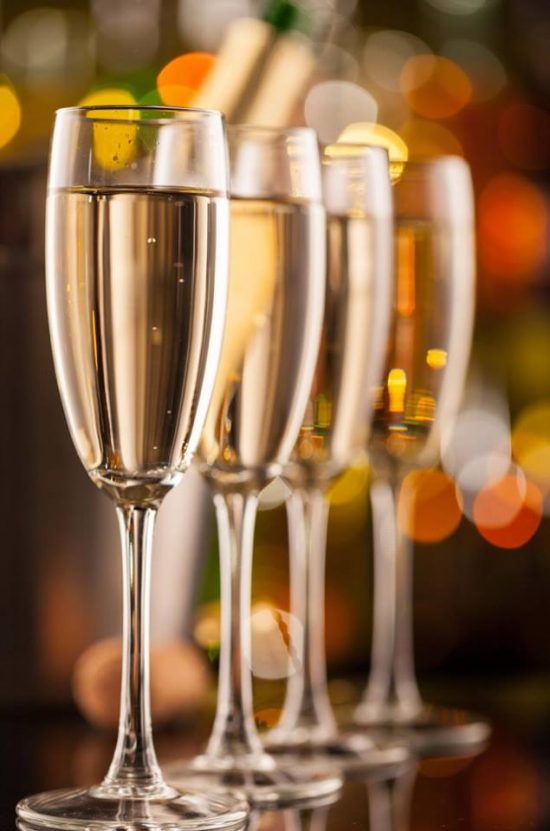 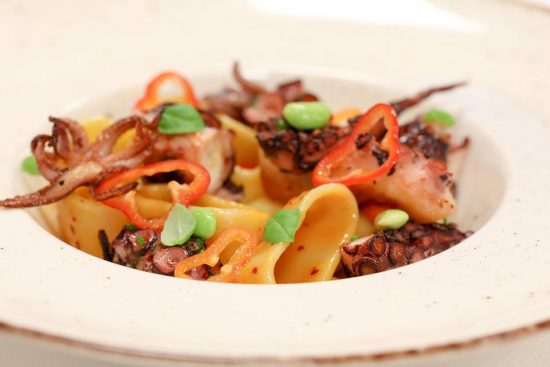 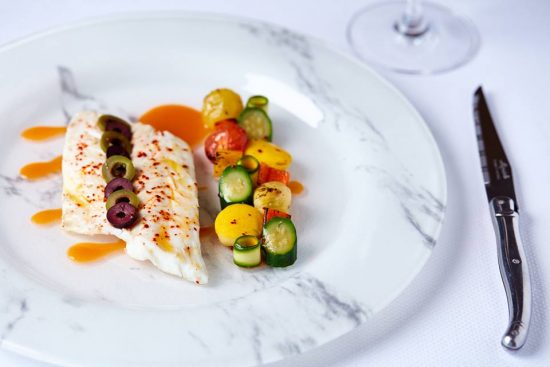 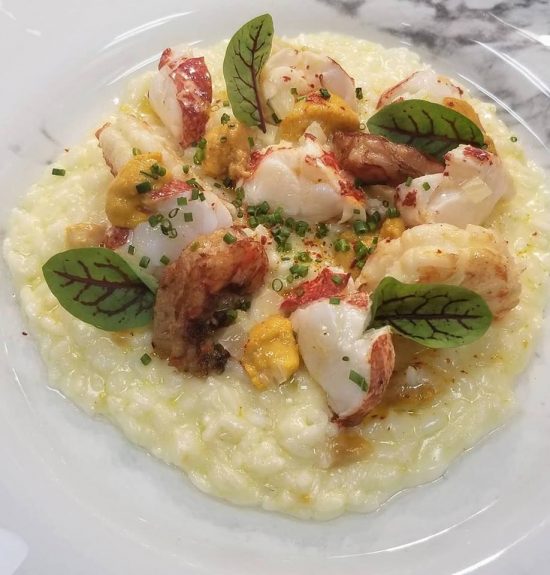 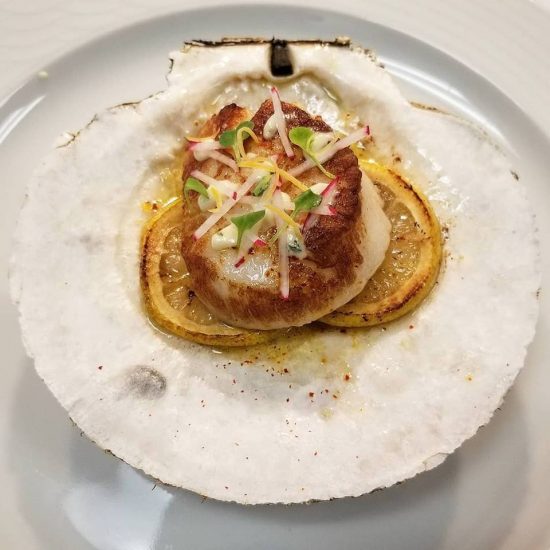 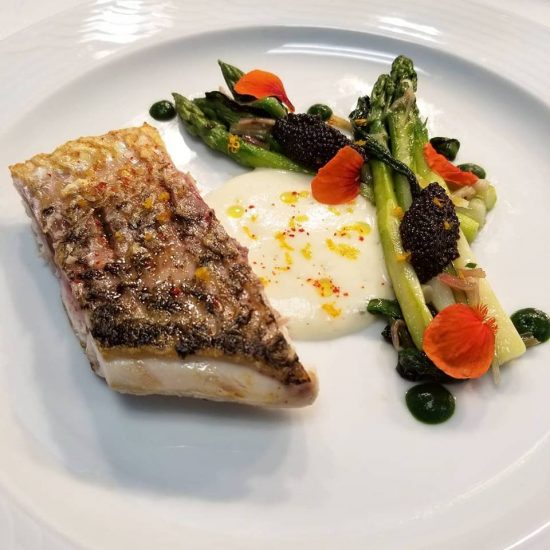 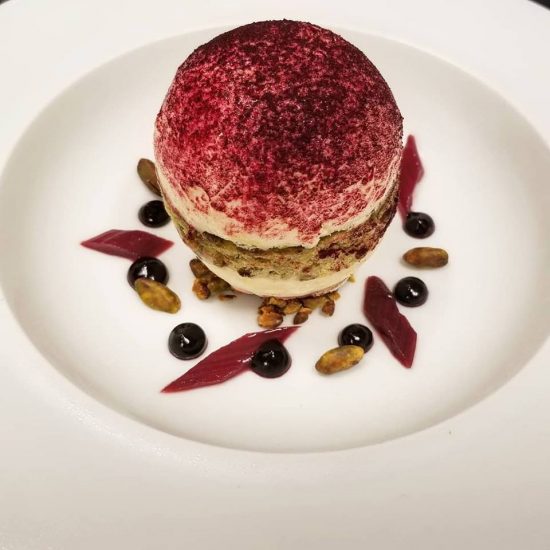 Sails is where you’ll discover effortless options: in addition to the dining room, enjoy hand-crafted cocktails while dining at the sail shaped white marble bar, imported from the Greek Islands. Nestled within a wine-walled cave, the intimate private dining room is an oasis for festive celebrations and special occasions, seating up to 10. 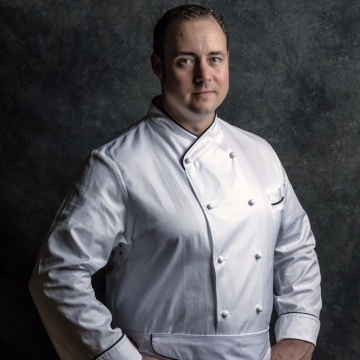 Sails’ Executive Chef Jacob Jasinski’s name is synonymous with excellence among well-heeled New England snowbirds: his reputation as one of its region’s most innovative seafood chefs prevailed during his tenure as top toque at Seasons, the acclaimed restaurant at Ocean House in Westerly, RI, where he reimagined its cuisine, elevating this landmark Relais & Chateaux property’s fine-dining venue to a 2017 Forbes Five-Star award winner – the state’s first and only earning this distinction. Chef Jacob’s achievements also merited a coveted spot on Condé Nast Traveler’s 2017 Gold List.

Adamant and passionate about working with the best ingredients, Chef Jacob is beyond thrilled in his new locale. “I’ve always sourced my ingredients locally and daily, relying on Mother Nature and her seas to determine what’s best. Working in Naples is exciting because Sails will seek and serve the area’s best produce from our numerous local farms, buying organic whenever possible, for pairing with a wide variety of seafood, flown in just moments after being caught in the Mediterranean. For a true European-style experience, guests may select their own fish, watching the team prepare each dish before their eyes on our custom-built cherry wood-burning grill. Guests preferring land-based savory delicacies, such as lamb, steak or fowl, will relish Sails too” with a selection of wagyu beef imported from Australia.

Throughout his culinary career, which includes positions at prestigious gastronomic havens Joel Robuchon in Las Vegas, Maine’s White Barn Inn, Newport’s Castle Hill, and The-Ritz-Carlton Buckhead, Chef Jacob cultivated an unusual approach to menu development: he lets his recipes evolve ever-so-slightly from one day to the next, depending on the most pristine ingredients available, expanding upon rich flavors imbued with meticulously refined classical techniques honed during early kitchen internships at several Michelin-starred properties in France and Italy. Even for a community with such a vibrant dining scene as Naples, Chef Jacob’s pedigree is most impressive, and it is quite a noteworthy addition to Southwest Florida, poised to easily be one of the most coveted reservations and outstanding dining experiences in the State of Florida. 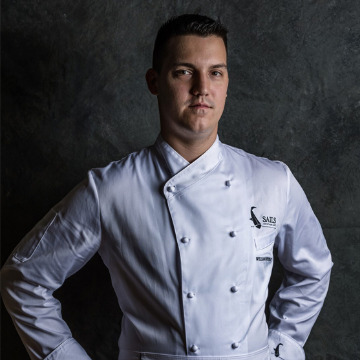 Rhode Island native, Chef de Cuisine William Rietzel III chef de cuisine embarks on his third re-teaming of talent with the restaurant’s executive chef Jacob Jasinski, who mentored Will at their first mutual posting, Newport’s Castle Hill. When chef Jacob moved to the Westerly, RI Relais & Chateaux property Ocean House, Will was his first hire, initially as a line cook but earning a relatively quick promotion to sous chef. Together, their efforts elevated the luxurious hotel’s fine-dining restaurant ranking from 4-stars to a coveted Forbes Five-Star rating in January 2017, making it one of the finest dining experiences in all of New England. I have enjoyed dining there several times.

Will has worked with acclaimed chefs as well as at notable bastions of hospitality in the USA and Europe. In 2013, Will ventured to Paris’ L’Office for a sous chef position with Castle Hill-colleague Kevin O’Donnell, Executive Chef, whose prestigious career already encompassed two+ years at Ristorante Zeppelin in Orvieto, Italy plus New York City’s Michelin-starred Del Posto. Under chef Kevin’s tutelage, Will mastered the intricacies of perfecting mouthwatering handmade pasta, lending al dente authenticity to Sails as its pasta maestro. Next up for both was Boston’s The Salty Pig, where Will served as sous chef. 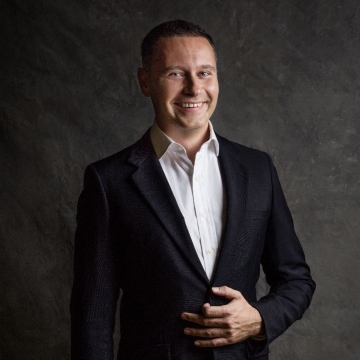 Veljko Pavicevic is a multi-faceted entrepreneur, co-founder and GM of Sails Restaurant (opening December 2017), he is an in-demand hospitality consultant whose expertise lies in improving bottom-line results through staff motivation, teaching hoteliers and restaurateurs techniques of increasing customer satisfaction through superior service.

Warm hospitality is part of Veljko’s disposition: he grew up in Serbia, renowned by many a travel writer as the “Land of Hospitality”, a very social culture whose residents often aspire to open restaurants as a personal showcase of welcoming ambiance complemented with an abundance of deliciousness served during a multitude of courses. Summers spent on Montenegro’s coastline with his grandmother nurtured his interest in cooking and being treated as a VIP because everyone entering her home was treated like royalty.

Veljko first visited America as a teenager, spending 1997 as an exchange student at Naples High School, forging strong relationships within the community that eventually led him back. Four years later, Veljko returned to the states, this time for a summer-exchange program, where his athletic prowess led to a swimming instructor post in Battery Park for New York City’s Parks and Recreation. Arriving with $400 in his pocket, he had two goals: saving enough money to put himself through college in the US plus capital to launch his own business. Within his first week, Veljko took advantage of all the city offers for a striving young man, landing a second job as an opening-team server at Compass, an Upper West Side eatery, resulting in 18-hour workdays, 7 days a week. Working to achieve his goals, Veljko amassed enough funds that summer to stay; with fond memories of Naples always on his mind, he returned, completing his Bachelor’s degree at Florida Gulf Coast University and working full-time at Syrah in Naples.

While serving guests from The Ritz-Carlton executive team, he was immediately poached to work at Artisans, the property’s five-star fine-dining restaurant. During his tenure, he quickly rose through management ranks via his highly-honed insight for anticipating guests’ needs and preferences; dedication to customer service; plus effortless communications skills necessary to coach colleagues.

In 2009 Veljko left The Ritz-Carlton to create his hospitality consultancy; concurrently, he founded Global Link, LLC, a multinational logistics company tapping into his international network. Through this position, he connected with entrepreneur Corinne Ryan in 2014 while working for a mutual Korean-based client. Corinne and Veljko quickly discovered a shared passion for exploring restaurants around the world; to date, they’ve ventured on more than 20 trips together spanning five continents. Their complimentary talents led to partnering on Sails, a restaurant destined for repeat visits amongst Naples’ sophisticated locals and visitors alike.

Sails’ guests will revel in a multi-sensory approach to dining upon entering the restaurant: Veljko’s passionate dedication to tactile and visual details, when combined with his stop-at-nothing nature, is showcased through his sourcing of — and frequent visits to — Europe’s most brilliant master craftsmen responsible for hand-making the restaurant’s elegant accoutrements.

Corinne Ryan, co-founder of Sails, is among a handful of the world’s top food brokers, one of the trading industry’s few women atop this field which requires incorporating hospitality to build and maintain professional relationships. She is also a visionary creator and producer behind several of her industry’s most prestigious events, most notably, a still-spoken-about race around Auckland (NZ) Harbor featuring a select fleet of America’s Cup yachts, followed by a celebratory feast of fine food and wine.

Corinne’s connections to the best local, national and international purveyors in sourcing the world’s finest ingredients lays the foundation for an unsurpassed gourmet experience amidst a convivial atmosphere.

Few understand the day boat-to-table concept like Corinne: in her role, Corinne negotiates trades, forging connections for global suppliers, wholesalers, and retailers (including restaurants and other food service providers). While day-to-day duties may not be so glamorous, her work travel certainly is, jet-setting to 44 countries over six continents, and where dining with clients at the world’s top restaurants is de rigueur. These journeys, coupled with her independent adventures and travels with co-founder Veljko Pavicevic, inspired Sails.

Born in New Zealand, and raised in Australia, Corinne grew up in Sydney, whereas a child, she worked for her parents’ importing company developing skills in merchandising and packaging. With 10 years’ work experience under her belt by the time she finished high school, she skipped university and entered the corporate world for Australia’s biggest meat importer-exporter-distributor, rising through its ranks in accounting, logistics, and documentation.

Tapping her myriad talents, new business development positions adding to the bottom line were created for her in the US, instigating a move to Colorado, where she spent six years expanding her company’s distribution while enjoying the ski slopes of Vail and Beaver Creek. In 2010, Corinne was appointed to create and lead a competitor’s US team, and she now calls Naples, Florida home. 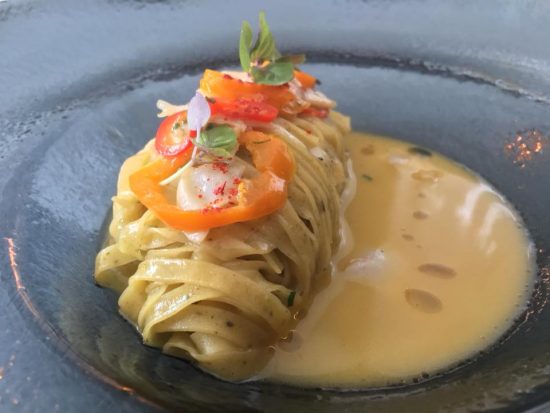 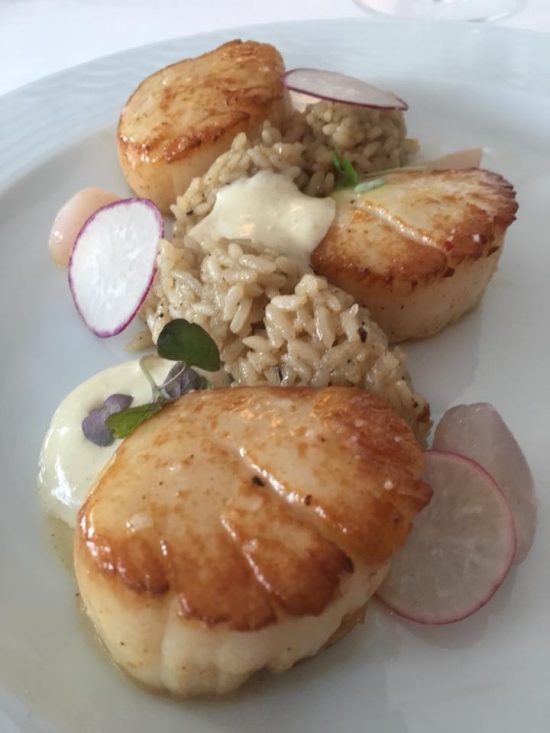 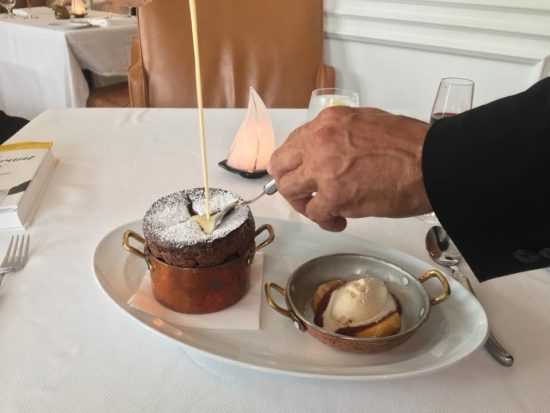 I'm CEO and President of Fred Bollaci Enterprises. I lost more than 100 pounds while living "La Dolce Vita" and I'm now known as "The Healthy Gourmet." Sample the good life with me through fitness, fine food, and good wine. Meet chefs who cater to a healthy gourmet lifestyle through my Golden Palate blog.
View all posts by Fred Bollaci →
This entry was posted in Fred Bollaci on Dining and tagged florida, naples, platinum palate, sails, seafood. Bookmark the permalink.