A Heartfelt Thank You to My Supporters: Celebrating “The Restaurant Diet’s” First Royalty Check; A Look Back And Ahead…

Yesterday I received my first royalties check for my first book, “The Restaurant Diet.” Before taking a look back and sharing some personal perspective today as a now published author on the difficult journey to get here, and my thoughts for the future, I would like to thank all my fans, supporters, and everyone who purchased my book so far. I hope you find inspiration, as well as some great recipes and weight loss tips. My goal was to create a book that is unlike any other “diet” book, and a cookbook that is unlike any other “cookbook.” From what I’ve heard so far, I have succeeded in both. Your support is a testament to that. What began over 7 years ago as a diary and new way of life is now getting out into mainstream society and changing how we as a culture look at food, nutrition, weight loss, and eating out. 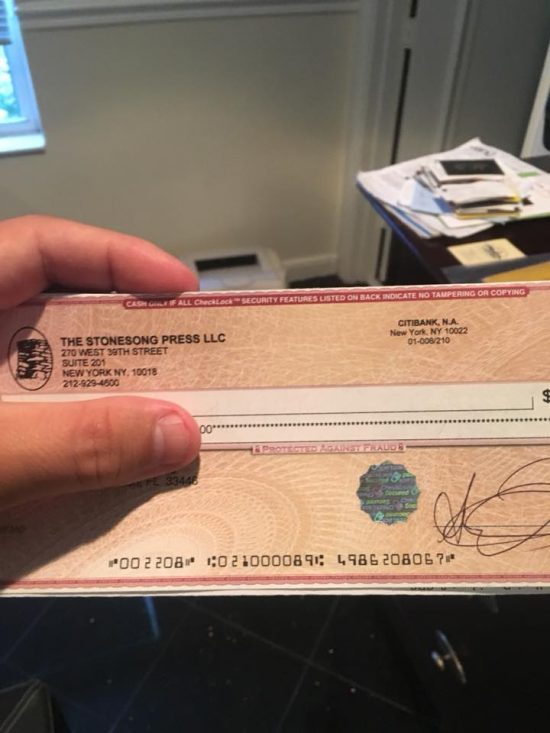 “The Restaurant Diet” began as a series of notes I made during my weight loss, which turned into a diary back in 2010-11 that I had no intention of ever letting see the light of day. Thanks to friends and family who encouraged me and practically begged me to turn my story into a book, it finally happened, and while it was never my objective, once I believed in my book and message, there was no stopping me. Back in 2011, I turned my notes into my first manuscript, which read more like “my life story” and in 2012 over the course of several months, 75 great restaurants from all over America joined me in contributing recipes, which validated what I was doing. Doing nutritional analysis, testing, tasting, and charts for over 100 recipes took months of my time, which I could have spent making money or pursuing other endeavors, but I felt this was important work, and I believed in what I was being asked to create. After two years of reading, researching, publishers conventions, writers workshops, query letters, and trying to find a publisher first (then an agent), I realized this was not going to be easy, but anything worthwhile is worth the effort. Fast forward: Three editors, three agents, many different titles, lots of editing, rewriting, second guessing, adding in, taking out, lots of travel, lots of meetings, trademarks, my first writing gig with Venu Magazine, starting a company and a blog back in 2014 which now has thousands of posts, creating a social media presence out of nothing, lots of interviews, lots of time spent working with great chefs, lots of singing for my supper, lots of sleepless nights, getting a Sommelier certificate, lots of good food and wine, four marathons, many half marathons, lots of anticipation, lots of memories, and lots and lots and did I say LOTS of expenses, lots of negativity and naysayers, lots of rejection letters, leveraging everything I had and who I thought I was to become an entrepreneur and an author when there were certainly easier paths, securing a book deal (publisher 20 after 19 rejection letters), adding 25 amazing new restaurants to my book, including the endorsement of a top Michelin-Star Chef, traveling to places I had never been—and ended up loving, Cooking School In Tuscany, meeting and very thankful to lots of great supportive people along the way, most I would never have met had I not decided to throw it all in and pursue my passion rather than do something “tried and true.” There were lots of times when I seriously questioned my own sanity for pursuing this, and nearly gave up, so victory is sweet, this is the first of many rewards, and validation that I did right by not giving up, for stepping way the hell out of my comfort zone, the biggest reward being that I’m still alive and feeling well, whereas I probably wouldn’t be here to see any of this had I not dared to challenge myself and believe I deserved better. Truth be told, it is easier to lose a lot of weight than to write, edit, and get a book published. I’ve since done dozens of book signings, appearances, and events so far in 9 states, with lots more to come, and have really enjoyed public speaking and “entertaining” my audiences. It’s not nearly as glamorous or lucrative (yet) as many including myself believed but it is humbling and gratifying to have made this permanent and positive contribution to society and offer a hopeful message and to have met so many great people along the way. Now I get to share it with the world. I also offer these words of wisdom: if you are passionate about something, go for it, don’t let the inevitable setbacks or perceived failures make you anything but more determined. Be realistic, and be humble. Anything worth achieving is worth working towards and fighting for, harder than you ever imagined. Sometimes the best things in life happen when we challenge ourselves to do something we never ever dreamed we would do. Losing sight of the shore to discover new opportunities helps us develop our shadow side, flex muscles we don’t normally use, grow by leaps and bounds in ways we never knew possible, and in the end makes us better people so long as we continue to sail forward despite the inevitable rough patches and storms. This is just the beginning. Thank you to the many great people I have in my corner. The best is yet to come! Looking forward to what’s next. 👍🥂🥂

I'm CEO and President of Fred Bollaci Enterprises. I lost more than 100 pounds while living "La Dolce Vita" and I'm now known as "The Healthy Gourmet." Sample the good life with me through fitness, fine food, and good wine. Meet chefs who cater to a healthy gourmet lifestyle through my Golden Palate blog.
View all posts by Fred Bollaci →
This entry was posted in News and Interviews and tagged book, royalties, thank you, The Restaurant Diet. Bookmark the permalink.