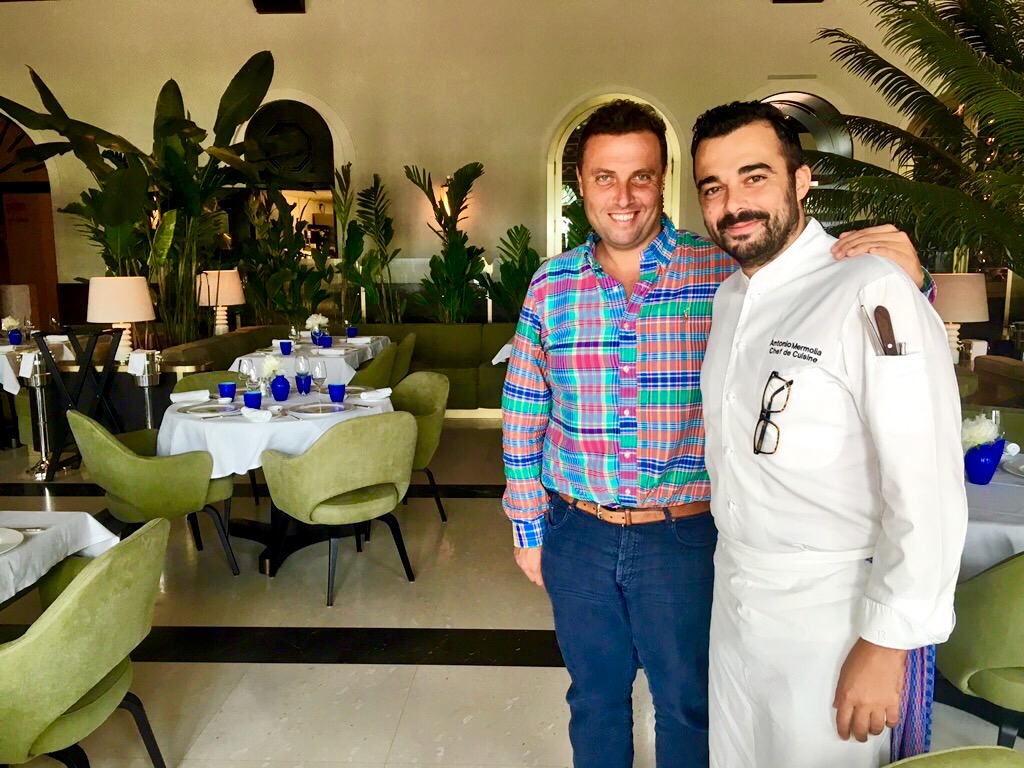 Fred Bollaci, CEO and President of Fred Bollaci Enterprises, the iconic international healthy gourmet food and travel authority has awarded 8 outstanding establishments in Florida the elite Platinum Palate status. The newest recipients are: Bern’s Steakhouse, a Tampa landmark serving exclusively prime beef, farm raised vegetables, home to the largest wine cellar in the world, and a Wine Spectator Grand Award Winner. Next is Naples favorite Bleu Provence, where husband and wife team, Jacques and chef Lysielle Cariot have been preparing authentic Provencale cuisine of their native France since 1991 when they discovered the jewel known as Naples. Their son and sommelier Clement manages the exceptional wine program, which has received top honors, a Grand Award from Wine Spectator two years in a row! The Breakers Palm Beach, the fabled icon overlooking the Atlantic Ocean epitomizes the good life in the tony South Florida resort town, and boasts fabulous food, spa, recreational amenities, and their HMF (named for railroad magnate Henry Morrison Flagler, who is credited with putting Palm Beach on the map over a century ago) is also a Wine Spectator Grand Award Winner. All three establishments are in Bollaci’s upcoming book, “The Restaurant Diet.”

Next up is the most exciting addition to the Miami Beach scene to date: the new Four Seasons Resort at The Surf Club, which has totally transformed the famed Surf Club near Bal Harbour into a luxurious 21st century oceanfront retreat, and has partnered with the legendary Le Sirenuse in Positano, Italy to open the first satellite location of Le Sirenuse in the form of Le Sirenuse Miami along with their iconic Champagne Bar in the new Four Seasons. Headed by Chef Antonio Mermolia from Italy, the cuisine and service are spot on! “Go and experience the very best Italian cuisine in Miami, it’s the real deal,” Bollaci said, having dined and stayed at Le Sirenuse in Positano many times.

Legendary upscale French restaurant Maison Blanche on Longboat Key near Sarasota is the next to be awarded the Platinum Palate. “It’s the best example of elegant fine dining reminiscent of what you’d find in Paris,” Bollaci said. Chef/Owner Jose Martinez worked at Michelin Star restaurants in his native France before coming to Florida. “Maison Blanche is a hidden gem. Not to spoil it, but I send everybody there.”

The next Platinum Palate is the renowned Marcello’s La Sirena in West Palm Beach, an area favorite since 1986 by Chef/Owner Marcello Fiorentino. The cuisine is authentic, fresh, flavorful, and very hands on–Marcello is an artist and you truly taste his experience and flavor palate, which stems from his family’s roots in Campania’s Sorrento-Amalfi Coast-Capri area. Marcello’s also boasts one of Florida’s best wine lists and collections of Italian wines in America, and has also been awarded the Wine Spectator Grand Award the last two years. “I love restaurants that combine excellent cuisine with fine wine, and are totally approachable. There is something for everyone at Marcello’s. Marcello prepares every meal, and finds the time to talk to every guest. That’s impressive,” Bollaci said. Marcello’s La Sirena will be featured with a signature recipe in “The Restaurant Diet.”

A new addition that went straight to Platinum is the beautiful, elegant Italianate Marco Beach Ocean Resort and Sale e Pepe Restaurant on Marco Island. With under 100 rooms, all suites, and all facing the Gulf of Mexico, attentive, friendly service, excellent food at signature restaurant Sale e Pepe with classic Italian cuisine, and marvelous sunsets, “I am delighted to have discovered a home away from home on beautiful Marco Island,” Bollaci said.

The last but certainly not least Platinum Palate award winner is seafood restaurant extraordinaire, USS Nemo (Naples), which has become famous for Montreal native Chef/Owner Nicolas Mercier’s unique brand of globally-inspired seafood dishes which rely heavily on fresh, local ingredients. “USS Nemo is fun, refreshing, and delicious–one of my favorite spots in Naples, in a strip center along busy Tamiami Trail, next to Norman Love Confections.” “Don’t miss the Sea Bass or Fish Tacos, enjoy with a bottle of Syltbar Rose’ and you will understand,” Bollaci said. You can stick around for dessert, or wander next door and sample some of Norman’s legendary chocolates–it’s worth a little extra time in the gym!”

Other news: Bollaci said due to the overwhelming success of his brand and concept, he is going to be revisiting and consolidating his award system in anticipation of his upcoming book launch. “Currently, we have nearly 1,000 Golden Palate award winners worldwide and over 100 Platinum Palates, as well as a number of “Preferred Destinations,” which was an entry level category we came up with when we launched the company in 2014 to signify places that we “recommended” but may have fallen short of Golden Palate.  Three years later, Bollaci said it is time to revisit this. “To simplify things, we will be revisiting and reviewing the Preferred Destinations to determine whether they should be Golden Palate (or Platinum Palate) establishments, otherwise they will be removed. My Advisory Board and I feel this is the best way we can benefit our audience. With the introduction of Platinum Palate this past year and upgrade of some Golden Palates to Platinum, and the increase in the number of establishments that have met the criteria for Golden Palate in a host of new markets, our focus needs to be on these two categories; either you’re Golden, you’re Platinum, or you’re neither. Saying you’re preferred is like saying “you’re alright, but.” There are lots of sites out there that list every place under the sun. We’re looking for places that are excellent (Golden) and exceptional (Platinum). Look for changes and new announcements in the coming weeks. Bollaci’s first book, “The Restaurant Diet,” featuring recipes from over 50 top restaurants nationwide, complete with nutritional analysis and his trademark four phase gourmet weight loss and lifestyle plan will be on shelves January 2, 2018, and is available now for pre-order on Amazon.com.

I'm CEO and President of Fred Bollaci Enterprises. I lost more than 100 pounds while living "La Dolce Vita" and I'm now known as "The Healthy Gourmet." Sample the good life with me through fitness, fine food, and good wine. Meet chefs who cater to a healthy gourmet lifestyle through my Golden Palate blog.
View all posts by Fred Bollaci →
This entry was posted in News and Interviews and tagged berns, bleu provence, breakers, florida, four seasons, maison blanche, marcello's, platinum palate, sirenuse, surfside. Bookmark the permalink.