Golden Palate® Ortygia, owned by Chef Gaetano Cannata from Sicily offers cooking classes to the delight of loyal patrons! Below, please enjoy a classic Sicilian recipe, and personal favorite, Pasta alla Norma– with eggplant, a favorite among Sicilians! Read a bit about the origin of the dish, and about the origins of modern-day Sicilian cuisine. Open a bottle of Nero d’Avola from Sicily, start sautéing the eggplant, boil some water, throw in the pasta, and Buon’ Appetito!

For centuries, Sicily has been known for the incredible variety of fruits and vegetables it produces. However, there is one vegetable that is ubiquitous throughout the island and is used extensively in the island’s local gastronomy. That vegetable is the eggplant.

The eggplant was first introduced to Sicily during the Arab occupation from 827 to 1061 A.D. It was named melanzana by the Italians of that time, due to the fact that it was roughly the size and shape of an apple and had a unfounded reputation for being poisonous and causing insanity, as mele is the Italian word apple and inzana is the word for insane.

While travelling through Sicily years ago when my two children were barely in their teens, I experienced one of the best eggplant dishes I had ever tasted up until that time. My Sicilian cousin took us all on an excursion to the city of Catania to what he considered to be one of the best restaurants in town.

When we exited the car, it looked as though we were in what may have been Italy’s version of the South Bronx. This was not the nicest neighborhood I had ever been in! As I clutched my children close to me, my cousin strolled across the street toward the local horse butcher.

Catania is one of the few places in Sicily where horsemeat is still considered a delicacy. I will admit that I may have been a bit turned off, but my 12-year-old son, who sampled this delicacy the previous night from a street vendor and relished it, was very excited. Luckily, my cousin walked into the adjacent building, which by the way, had no door, no storefront window, no sign, no name, and no horse.

Fifteen minutes later we were ushered into a one-room building with a small residential kitchen, wine barrels built into the wall, and a 10-course meal prepared by the mother and grandmother, served by the daughters, and run by the father, who’s responsibilities were to drink wine and check on our wellbeing.

Our food and service were first-class. I walked into the kitchen and made friends with the grandmother, who attempted to arrange a marriage between me and one of her beautiful twin granddaughters. A picture of them still adorns my restaurant wall many years later.

The dish I enjoyed most was the Pasta alla Norma, which in my restaurant goes by the name of pasta Siciliana. It is one of the two signature pasta dishes of Sicily. It is a simple preparation, so it is of the utmost importance that you use nothing but the finest and freshest ingredients. 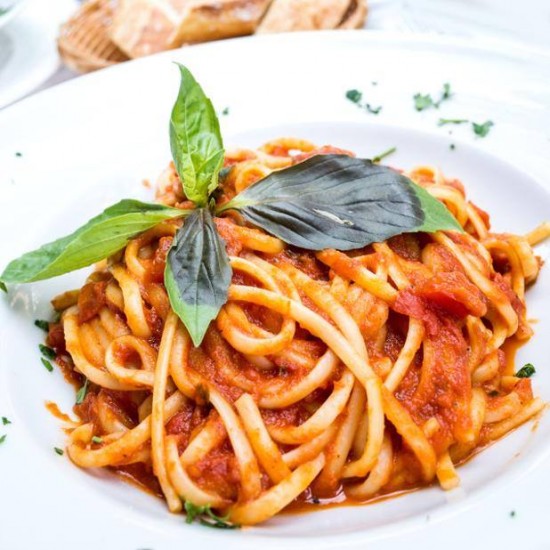 1 (28-oz.) can whole peeled imported San Marzano tomatoes, entire can including the puree and crush by hand

1 lb. bucatini or ziti, if preferred

Heat oven to 400 degrees. Put eggplant into a bowl and drizzle with half the oil. Toss to combine and season with salt and pepper. Transfer eggplant to baking sheet and bake, turning occasionally, until soft, about 15 or 20 minutes. Set aside. Alternatively, sauté the eggplant in vegetable oil on medium heat until soft.

Heat remaining oil in a pan over medium heat. Add garlic and cook just until it turns color slightly, about one minute. Do not brown! Add tomatoes and half the basil, season with salt, and cook until heated through, about 5 minutes.

Meanwhile, bring a large pot of salted water to a boil. Add pasta and cook, stirring occasionally, until just al dente, according to the directions on the box. Drain pasta and transfer to tomato sauce. Stir in reserved eggplant and toss to combine. Stir in remaining basil and season with salt. To serve, transfer pasta to a platter and grate with ricotta salata. 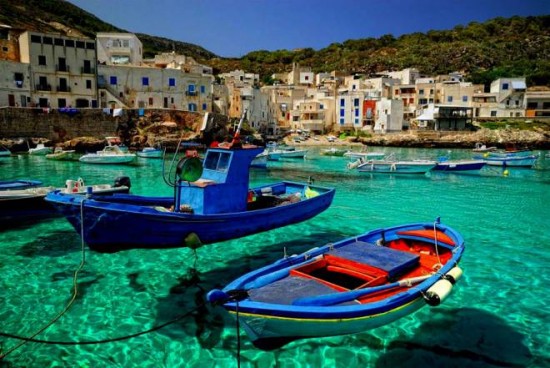 Pictured above: Sicily, known for its incredibly clean, transparent waters and naturally, amazing seafood! Chef Gaetano takes a group each year on a personally-guided tour of Sicily! When you stop in, be sure to inquire!

Below, Chef Gaetano writes about the legend of “The Monzu,” a fascinating story about how Sicilian cuisine has been influenced by the numerous outsiders who have occupied the island. The story comes from his blog, accessible from the restaurant website.

When Napoleon invaded Naples in 1798, Sicilian cuisine was forever changed. At that time Naples and Sicily were collectively known as “The Kingdom Of The Two Sicilies”.The monzu introduced among other things, butter and cream into thekitchens of Sicilian nobles. Their roots were in the French culinarytradition, but their flavors were connected to the bounty and history of Sicily. The cuisine of the Monzu was, more or less, a Sicilian/French fusion.

With time “Monsieur” became “Monzù”, and if a particular Monzù served a particular family for a long time, he was referred to as Monzù, followedby his employer’s last name, while the best dishes he created (perhaps at the suggestion of the employer) were given his employer’s name, and kept quite secret.

Endowed with great prestige and influence, the Monzù also added such foods as consommé and foie gras to the Sicilian menu.

In the early decades of the 20th century, Sicily emerged as a favorite winter resort for European royalty, and the Palermo Monzù chefs cooked for kingsand Kaisers. As the era of Sicilian aristocracy faded around the turn of the 20th century, the time and energy spent on preparing such foods made itdifficult to continue this noble tradition and it quietly fell out of fashion. Withthe decline of the aristocracy the great Monzù were forced to leave theemploy of their masters; some turned to cooking for social clubs of one sort or another, while others opened restaurants, and to this day Neapolitans and Sicilians use the term Monzù to refer to a great chef.

Here at Ortygia, we bring to you not only the cuisine of the Monzù, but also the simple, yet delicious food of the common people, “La Cucina Povera.” When in Bradenton, Ortygia is a must! Please be sure to tell Chef Gaetano that Fred Bollaci sent you! 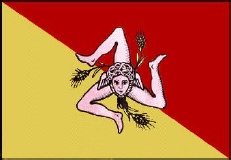 The Flag of Sicily is represented by the “Trinacria” or three-legged fertility goddess. Sicilians hang ceramic or wooden “Trinacrie” in their homes, to “ward off the evil eye” or malocchio. 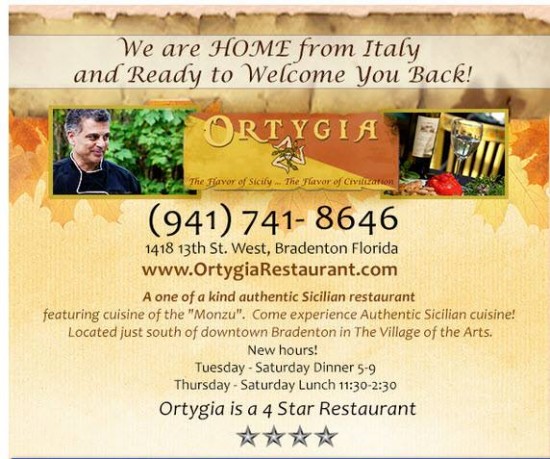 Tonno in Agrodolce with Braised Fennel and Garlic Peperonata

Braised Fennel Preparation:
Add fennel to small saute pan, cut side down, with olive oil, garlic cloves, and salt and pepper to taste. Put on medium heat and cook until cut side of fennel turns golden, about ten minutes. Turn fennel over. Cook for five minutes, then add white wine. Cook for five more minutes. Turn fennel back over, cut side down. Turn down heat as low as possible, cover and simmer for 20 minutes. Add extra wine a bit at a time if the pan gets dry.

Tuna Preparation:
After the peperonata and braised fennel are on the stove and simmering, melt butter with olive oil in pan over medium heat. Mix the fennel, salt and pepper in a bowl. Dip tuna in fennel mixture on both sides to coat. When butter sizzles add tuna to pan. Cook for two minutes. Turn over the tuna pieces, raise to high heat and add the Marsala. Lower heat to medium and squeeze in lemon juice. Cook for two minutes. Remove from heat and place tuna on a plate with the juices. To server, cover with the peperonata, add braised fennel to plate with cut side facing up with the pan reduction and garlic.